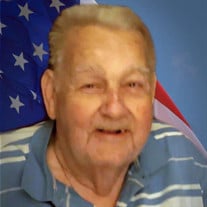 SOUTHERN WINSTON SALEM Billy Gray Southern, 89, went home to be with his Lord Saturday evening, September 18, 2021 at Atrium Health Wake Forest Baptist. Billy was born on March 21, 1932 in Stokes County to the late Ruben Thomas and Beatrice Tucker Southern. He was a retired car salesman and served his country proudly during the Korean War in United States Army and was a purple heart recipient. Billy enjoyed watching TV as well as attending auctions. He also liked purchasing items to resell. In addition to his parents, Billy was preceded in death by his wife, Juanita Joyce Southern; and a son, Richard Southern. He is survived by his 4 children, Mike Southern (Cathy), Wanda Priddy, David Southern (Chrissa), and Hope Southern; 6 grandchildren, Shawn, Amy, Joyce, Ashley, Chris, and David; 14 great grandchildren. There will be an 11:00 am graveside service held on Wednesday, September 22, 2021 at Gardens of Memory with Pastor Frank Shumate officiating. The family will receive friends on Tuesday, September 21, 2021 from 4 – 6 pm at Burroughs Funeral Home. Online condolences may be made at www.burroughsfuneralhome.com. Burroughs Funeral Home, Walnut Cove is honored to be serving the Southern family.

The family of Billy Gray Southern created this Life Tributes page to make it easy to share your memories.

Send flowers to the Southern family.