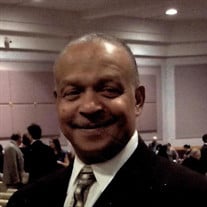 White, Sr. Walnut Cove, NC Charles D. White, Sr. was called to rest on Thursday, February 11, 2021 at his residence in Walnut Cove. Charles was born in Cumberland, Virginia to the late Charles Irving and Gertrude Brown White on September 17, 1956. He was a faithful member of Kingdom Hall-Jehovah’s Witness in Walnut Cove. Charles dedicated his life to Jehovah where he was baptized as a Jehovah’s Witness and remained dedicated. Charles always wanted to preach and teach the good news of Jehovah’s Kingdom. As one of Jehovah’s Witnesses, his hope was to live again on a paradise Earth where he hopes to reunite with his love Julia Toney White. Revelation 21:4 “And he will wipe out every tear from their eyes, and death will be no more, neither will mourning nor outcry nor pain be anymore. The former things have passed away.” Charles was an avid basketball fan, with his favorite team being the LA Lakers. He also enjoyed crossword puzzles, reading, playing chess, and most of all, spending time with his family and his friends. In addition to his parents, Charles is preceded in death by his wife, Julia Toney White, and brother, Irva White. Charles is survived by three children, Charles D. White, Jr., Keesha White, Natasha Ford (Donald), two sisters, Iris White and Ilva White, brother Carlton White, eight grandchildren, two great grandchildren, and a host of nieces and nephews. There will be a memorial service held later. There will be no formal visitation. In lieu of flowers, donations may be made to Kingdom Hall Jehovah’s Witness, 1363 US-311, Walnut Cove, NC 27052. We wish to express our sincere appreciation to all for the sympathy, comforting words, prayers, love, and kindness. Online condolences may be made at www.burroughsfuneralhome.com Burroughs Funeral Home, Walnut Cove is honored to be serving the White family.

The family of Charles Demetrius White Sr. created this Life Tributes page to make it easy to share your memories.

Send flowers to the White family.