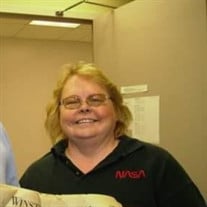 SALMONS WINSTON SALEM Phyllis Ann Salmons, 69, went home to be with her Lord Sunday morning, December 12, 2021 at Forsyth Medical Center. Phyllis was born on October 16, 1952 in Forsyth County to the late Carley Gray and Addie Mae Davis Salmons. She was of the Baptist faith and was retired from Embry Riddle Aeronautical University as a tenured associate professor with 38 years of service. Phyllis’ hometown was Winston Salem and she lived there from 1952-1970. She took her education very seriously, having earned her bachelor of science in math with a minor in education from Appalachian State University, Master of Arts in College Teaching in Physics from Auburn University, where she also taught college for two years. Phyllis also attended Embry-Riddle Aeronautical University in Daytona beach, where she obtained her associate of Science in Aeronautical Science, Bachelor of Science in Communications, as well as serving as the director of SACS (Self-Study for Accrediation). She received her Associate of Science in Paralegal Studies from Keiser College in Daytona Beach, FL. Phyllis worked in the NASA Education Office in the Faculty Fellowship Program at NASA Huntsville for two summers. She was a Freelance Correspondent for Daytona Beach News Journal. “I have often told people that they can take away your car, or your home. They can even come and take away your children. But they can never take away your education. On top of that, no matter how much you give it away, it just keeps on growing”. – Phyllis Salmons “My birthday was one day too late to enroll in school, but I wanted to go so badly that Mama talked the teachers into letting me start at five years old. I have been going to school ever since”. –Phyllis Salmons “One of my earliest memories is standing with my brothers waiting for the school bus when I was too young to go to school. One time a bus driver looked down on me and asked ‘Don’t you want to come too?’ I remember thinking ‘YES I DO!” Phyllis was Twice named “who’s Who Among America’s Teachers. She had numerous awards received from students for excellence in teaching. Phyllis was a frequent writer for the Avion, the student newspaper from Embry-Riddle. She was a published writer in numerous magazines as well as online. Phyllis spent several years as a disc jockey playing Southern Gospel Music. In addition to her parents, Phyllis was preceded in death by her brother, John Alfred Salmons. She is survived by her devoted sister, Vera Mae Guthrie (Jack) of Winston Salem; 2 brothers, Garland Gray Davis (Kikuko) of Hawaii and Raymond Thomas Salmons (Bonnie Jane) of California; numerous nieces and nephews; many great nieces and nephews; her caregiver, Amanda Atwood, who was always caring and compassionate toward Phyllis. There will be a 2:00 pm graveside service held on Thursday, December 16, 2021 at Love’s United Methodist Church Cemetery with Pastor Gary Styers officiating. The family will receive friends on Wednesday, December 15, 2021 from 6 – 8 pm at Burroughs Funeral Home. Memorials may be made to the donor’s choice in Phyllis’ name to any organization that relates to animals. Online condolences may be made at www.burroughsfuneralhome.com. Burroughs Funeral Home, Walnut Cove is honored to be serving the Salmons family.

The family of Phyllis Ann Salmons created this Life Tributes page to make it easy to share your memories.

Send flowers to the Salmons family.