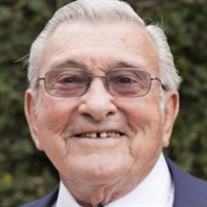 BOWMAN, Posey Suttle, at the age of 86, (October 28, 1934) passed away on August 14, 2021, in the Joan and Howard Woltz Hospice House, Dobson, North Carolina. A devout Christian, Posey has joined Jesus Christ, his Lord and Savior. Posey never meet a stranger and his smile was infectious. Posey Bowman was the oldest of three sons born in Walnut Cove to Tom Suttle and Crecy Emily Bowman, who predeceased him. He grew up on a tobacco farm, graduated from Walnut Cove High School and played football for the Wildcats, which won a state championship. He married his wife, Mary Ruth Woods on September 25, 1954. He and his wife worked together most of their lives. Posey was an avid fisherman and bird hunter. He was a charter and faithful member of Willow Oak Baptist Church which was founded by his uncle, Rob Mabe. There he taught Sunday School for over 60 years. In 1973, Posey started his appliance, TV and furniture business with a partner in Walnut Cove. Posey was a people person and so enjoyed knowing his customers and their families. He was also a retired volunteer for the local fire and rescue service for over 30 years. He was predeceased by his wife, Mary Ruth Bowman in 2013 and his son-in-law, William Fowler in 2015. He is survived by his son, Ricky Lynn Bowman and his wife, Karen and his daughter, Janet Bowman Fowler. He is also survived by two grandchildren; Dr. Katelyn Bowman Feinberg and her husband, Alex and Austin Kyle Fowler. His grandchildren and his two great-grandchildren, Thomas and Libby Feinberg, were a focal point of his life and brought him great pride and joy. He is also survived by a brother, Floyd Bowman and his wife Myra of Walnut Cove and is predeceased by a second brother, Grant Bowman who died in 2015. Posey will lie in state at Burroughs Funeral Home on Monday, August 16, 2021. Friends wishing to honor him may come to Burroughs from 5-7 pm. The family will have a private graveside burial on August 17, 2021. The service will be held at Willow Oak Baptist Church Cemetery. In lieu of flowers, those wishing to make a contribution might consider donating to Willow Oak Baptist Church, P.O. Box 705, Walnut Cove, NC 27052, The Gideon Society P.O. Box 1167, Walnut Cove, NC 27052 or to the Joan and Howard Woltz Hospice Home, 945 Zephyr Road, Dobson, NC 27017. Online condolences may be made at www.burroughsfuneralhome.com. Burroughs Funeral Home of Walnut Cove is honored to be serving the Bowman Family.

The family of Posey Suttle Bowman created this Life Tributes page to make it easy to share your memories.

Send flowers to the Bowman family.