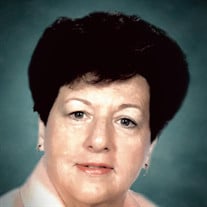 Velmalene Stevens Leake December 18, 1930 - July 22, 2021 On a snowy night in December, 1930 Manie Odell Stevens tried to get the doctor from Stuart, VA to his home in Lawsonville, NC. The roads were too treacherous and the doctor did not get there until morning. By that time Josie Marie Rhodes Stevens had given birth to their first child and all were doing well. Thus began the extraordinary life of Velmalene Stevens Leake. She learned to work from an early age, standing on a box to wash dishes, helping to carry water from the spring to her mother’s beauty shop, or helping her uncle to fill the many “delco” batteries in their delco plant that generated electricity for MO Stevens General store and Beauty shop. She even learned how to grind sausage in the large meat grinder as people drove for miles for quality sausage. It was while putting up stock that she learned of the bombing of Pearl Harbor and the beginnings of the Second World War. Manie and Josie had 2 more daughters and 2 sons to round out their family. Jeanette S. Hartley and Larry M. Stevens predeceased Velma, along with their parents. Barry J. Stevens (Barbara) and Susan S. (Frank) Wright survive. Velmalene managed/.played basketball at Lawsonville School. Upon graduation she completed the course of study at Marshall’s Beauty School in Winston Salem and joined her mother’s beauty shop for a short time. Later she worked in the Davis Department Store beauty shop in Winston Salem, and Hope & Bailey’s in Walnut Cove. On July 14, 1950 Paul Jackson Leake (PJ) and Velmalene Stevens were joined in marriage. To that union were born Rev. Jennie Leake Hemrick, who survives; Paul Jackson Leake, Jr. deceased; Mark Leonard Leake and Clark Steven Leake, who survive. Survivors also include 5 grandchildren, Clara-Marie (Brian) Wicker, Jason Paul (Nicci) Leake, Joseph Eugene (Kimberly) Leake, Stephen Jackson (Candace) Leake, Daniel Evan Leake. Seven beloved great-grandchildren, Joseph and Maddison Leake, Riley Leake, Justin and Cole Leake, and Scarlett and Warren Wicker. Velmalene Leake established Velma’s Beauty Shop in Danbury and worked alongside PJ as they established clean water for the residents of Danbury, raised necessary funds to build Danbury Volunteer Fire Department, raised money and influenced politicians to build Moratock Park on the banks of the Dan River, and build the much-needed Stokes-Reynolds Hospital (Life Brite). Velmalene served 2 terms as Chairwoman of the Stokes County Democrat Party, and 21 years on the Stokes County Board of Elections. She believed that government “for the people” could only be accomplished if every individual exercised their right to vote. She was loyal to the Democrat party and voted in every election during her 69 years of eligibility. In 1983 Velmalene Leake was one of the founding members of Danbury Community Church (a union of Methodist and Presbyterians) and served as Treasure, Elder, Committee member and provided beautiful flower arrangements each week for as long as her health allowed. She served on 3 foreign mission building teams with UMC, where her gifts of biscuit making and hair cutting graced men, women and children. After one trip Velmalene sent regular contributions and financed the education of an entire family. In the words of her cousin, “Velmalene was class and sass all wrapped up into one.” Friends and family will gather at Danbury Community Church, 613 N Main Street, on Thursday, July 29 at 2:00 for a service to Celebrate the Life and Resurrection. Visitation will be on Wednesday, July 28, 6-8 at Burroughs Funeral Home in Walnut Cove. All are asked to observe Covid-19 guidelines, taking care to respect the health and well being of others. In lieu of flowers memorials may be made to Danbury Community Church, P.O. Box 97 , Danbury, NC 27016; or Mountain Valley Hospice, 129 Veterans Drive, Pilot Mountain, NC 27041. Special thanks for their loving care go to Dr. Dana Wood Winn, caregivers Jane, Denise, Heather, Wanda, Patricia, Victoria and Grant; and to the wonderful staff of Mountain Valley Hospice. Online condolences may be made at www.burroughsfuneralhome.com Burroughs Funeral Home, Walnut Cove is honored to be serving the Leake family.

Velmalene Stevens Leake December 18, 1930 - July 22, 2021 On a snowy night in December, 1930 Manie Odell Stevens tried to get the doctor from Stuart, VA to his home in Lawsonville, NC. The roads were too treacherous and the doctor did not get... View Obituary & Service Information

The family of Velmalene Stevens Leake created this Life Tributes page to make it easy to share your memories.

Send flowers to the Leake family.