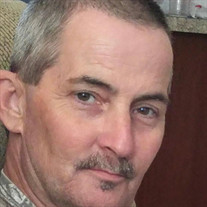 LASHLEY PINE HALL William Thomas “Tommy” Lashley III, passed away unexpectedly Monday evening, April 5, 2021 at Wake Forest Baptist Hospital. He was 54 years old. Tommy is preceded in death by his wife of 21 years, Renee Smith Lashley and his father William Thomas Lashley. Tommy, as he was known to family and friends, was born in Greensboro, NC on August 26, 1966. He attended Madison-Mayodan High School and received his GED later in life. Tommy was a hard worker who always tried to provide for his family. He was a devout Christian and believed every word in the bible and had an unmovable faith in God and the miracles that he could perform. Tommy loved his family and could often be heard bragging about his son and daughter-in-law. He loved his grandchildren more than anything. Tommy worked at Wieland Copper in the early 2000’s and was proud of the work that he did. He was an honest man who loved to work with his hands. Tommy was the type of man who would give you the shirt off his back if you needed it. Tommy is survived by his son, Cole Lashley (London) of Greensboro, as well as his beloved grandchildren, Arabella, Greyson and one on the way. He is also survived by his wife Lorraine Bullock-Gore Lashley, and his stepchildren Christopher Gore and Samantha Prentice. His mother Carolyn Lashley Simpson (Cliff) of Holden Beach, NC, brother John Lashley of Stokesdale and several nieces and nephews. There will be a 2:00 PM Graveside Inurnment service held on Sunday afternoon, April 11, 2021 at Bald Hill Missionary Baptist Church Cemetery, 593 Bailey Rd, Madison, NC 27025 with Rev. Darrell Freeman officiating. The family will receive friends following the service. Social distancing guidelines will be enforced, and facial coverings are required. Online condolences may be made at www.burroughsfuneralhome.com. Burroughs Funeral Home is honored to be serving the Lashley family.

The family of William Thomas Lashley created this Life Tributes page to make it easy to share your memories.

Send flowers to the Lashley family.